Gig Review - Jess and the Bandits - Under The Bridge 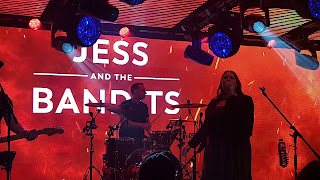 Jess has taken a year off from performing to deal with the small matter of a new baby bandit – and rather than ease herself gently back into our minds, she has stormed back in like a Texan tornado.  With a new EP out in digital format next month, a new single which has already dropped, Jess also decided that she needed to get out on the road and remind us all that she is back!

Winding its way around the country, the tour ended at a venue which is fast becoming synonymous with Country party nights in London – Under The Bridge at Chelsea FC’s home Stamford Bridge.

Before Jess took to the stage though, there was quite a line up of support acts – all of whom have previously been reviewed by Silverball Country!

Binky was first up, delivering a confident, assured set. Still relatively new to the scene it was a pleasure to actually meet her in person and have the chance to see her performing live -  having previously only heard her studio material.  Binky mixed her own compositions with a notable cover of Maren Morris’ “My Church” plus a song dedicated not – as many people seem to think -to a man but to the immortal Jack Daniels and it seemed that her voice improved from start to finish of her set.

A very quick changeover saw Two Ways Home take to the stage, performing tonight as a four piece. It is always a joy to see how versatile and adaptable Isi and Lewis are, and tonight was no exception. Kicking off with Isi playing the mandolin (please play it more often!) and showcasing tracks from their forthcoming album – Speed of Anything and Out On The Road which is released on 18 October.  I’ve seen two Ways Home in many settings – but this was an absolute stand out performance for me, and I can’t wait to hear the rest of the album! 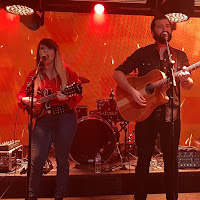 When The Fatherline came out for the final support slot, Tim P-J started by asking the crowd if anyone had seen them play before. A fair question as this was only the fourth gig they have played – but Silverball Country have managed to be at every one of them! I can’t tire of watching Tim’s quite incredible stagecraft, fantastic banter and quite stunning vocals. The Fatherline may be a new band, but Tim’s experience and training really shows as he delivers such a polished and confident performance every time. 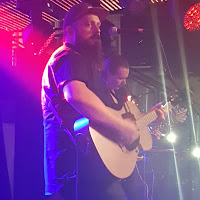 And so to our headliners – Jess together with her bandits for their last night touring.  Jess hit the stage with pure energy, as if she had never been away, and certainly as if she hadn’t just toured the UK with a 6 month old baby in tow! The whole set was at the same level and just so enjoyable!  Some stand out moments:


Add to the mix a very Country cover of Mama Told Me Not To Come featuring a Luke Thomas vocal solo, a t-shirt and ep give away and a final song Ready Set Drink which ended the main part of the show with as much energy as they started. 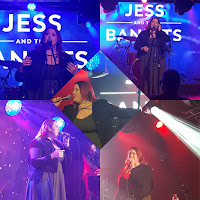 How do you top that for an encore?  You bring your six month old son on stage with you!

From start to finish, Jess and The Bandits delivered a barnstorming set, leaving us in no doubt at all that Jess Is Back! 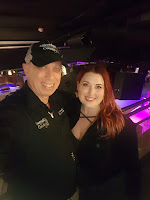 Posted by Silverball Leisure at 6:02 AM