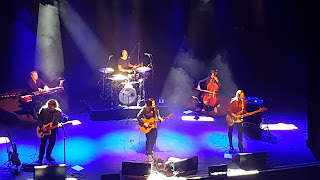 With stiff competition on a Friday night during Country Music Week, we chose to head to the O2 Empire at Shepherds Bush to see Brandy Clark.

Sat in uncomfortable seats, we got a true theatre announcement that the support act would "start in 5 minutes".

Two guys, two guitars. Although normally performing with a six-piece band, Kyle Daniel, with his best friend Seth Rentfrow accompanying him, took to the stage in London declaring it to be a dream come true. As is often the case with a Brandy Clark gig, you feel like you are in a smoky Nashville honky-tonk, despite the venue size, the gig has that intimacy. The dream theme was carried through to their last song American Dream. The boys made time to meet fans in the interval to chat, take selfies and deliver hugs – or “herrgs” as Kyle’s Kentucky accent has it!  A fabulous and friendly pair who are playing again as part of Country Music Week (at Bush Hall on Sunday 27 October) we hope that this won’t be the last time we see them! 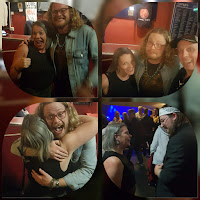 After the interval it was time for Brandy Clark. Probably one of the most talented but underrated singer songwriters (in the UK at least) it was a joy to see her play with a full band and to a sell out crowd in her only UK appearance this year.

With typically no fuss or fanfare the lights came up as Brandy and her band launched into Girl Next Door. We had been promised Brandy’s new music, but we were all very happy to hear her previous music, and she played through Big Day In A Small Town, Love Can Go To Hell (which sounds amazing with the addition of a Cello), a fabulous guitar solo into Get High and You’re Drunk before switching to her new music. 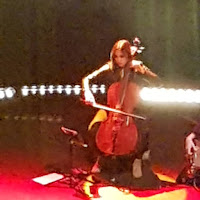 Brandy Clark is only playing this one UK date this year but promised to return in 2020 with her new album. This was greeted with much delight – underlining her comment that playing in the UK feels like a hometown show

The new album promises to carry on with what we are used to from brandy, expert storytelling in a truly traditional country song writing style – Love Is A Fire, Take a Long Walk, Pawn Shop and Who You Thought I Was were all very well received, and when Brandy sang Pray To Jesus you could hear the whole audience singing along almost like a choir – and word perfect for every song! A story about the movie Jaws was the intro to new song (recorded with Randy Newman) A Bigger Boat – and it felt like an intro that only a storyteller like Brandy could pull off.

A set of covers featuring Brandy on stage with just her guitar showed her incredible singing voice and her influences, then the band re-joined for her revenge songs featuring Daughter and ending the set with the gentle Hold My Hand and the more raucous Stripes. One single song for the encore, a solo rendition of Three Kids No Husband.

Brandy Clark, together with her band, delivered a no fuss set of incredible music – old favourites, covers and tracks from the eagerly awaited new album, but she still feels like a well-kept secret, and surely she deserves to be playing bigger venues to bigger acclaim.

In keeping with the intimacy of the gig, the party carried on in the nearest pub, with Kyle and Seth drinking with fans and Brandy’s band amused to hear one of their songs played by the DJ! 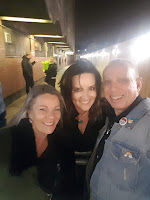 Posted by Silverball Leisure at 11:57 AM