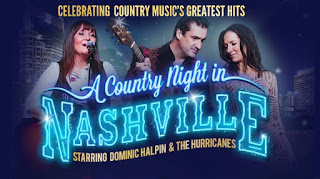 While some country fans were out in Birmingham on Friday night to see Chase Rice, the sequinned Stetsons were out in force at the Alexandra Theatre to see Dominic Halpin and the Hurricanes perform in the stage show tribute to Nashville and its music. Looking every inch the archetypal country star, Dominic takes centre stage, alongside his glamorous leading lady Shelley Quarmby. Shelley proves though that she is more than just a pretty face, taking lead vocals on songs from the queens of country as well as playing keyboards for some numbers.

Lights down, music up loud as we open with a recording of The Devil Went Down to Georgia and already the audience are clapping and fiddling along. Lit by a single spotlight the show opens with a haunting stripped back chorus of Dolly Parton’s Jolene from Shelley before Dominic enters kicking it up a gear with a very authentic rendition of Johnny Cash’s Ring of Fire. Behind the pair of them is Donna Marie on keys and backing “oohs” clearly already having fun.  In his introduction Dominic promised to bring a bit of Nashville to Birmingham before launching into the fast paced The Auctioneer. 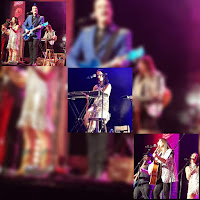 The lead changes throughout the show, with Shelley stepping forward, her voice combining beautifully with Donna Marie

The “girls” introduced some newer country with a simply stunning acoustic rendition of Shania Twain’s Still The One with Donna Marie on guitar and vocals alongside Shelley. The Dixie Chicks’ Travelin’ Soldier really showed how powerful their vocals are, and also showed that this is not a covers show, or a jukebox musical – this is a performance by very talented musicians of Country Greats.


With act 1 closed by a very spirited Eddie Cochrane’s Summertime Blues, you were left wondering how they could possibly follow that, whilst queuing for ice cream…

Curtain up for Act 2.  The excitement was built with the theme to the Magnificent 7 as the band took the stage to wow us all once again.  One Night In Nashville reminded us that the show is designed to transport us to a Nashville Honky Tonk (as if we needed to be reminded!), followed by more of Dominic’s humour and stagecraft telling stories about Johnny Cash before a medley of the Man In Black’s songs. 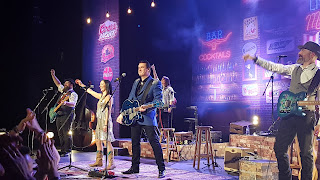 Donna Marie singing Gretchen Franklin’s Redneck Woman, Shelley accompanying herself on the keyboard for a solo of Little Big Town’s Girl Crush and Dominic singing Don Gibson’s Sea of Heartbreak alone on stage before singing one of his own compositions - Fire and Smoke - really underlined that individually all three performers are very talented in their own rights, expertly supported by bass, guitar/lap steel and drums.

Highlights then included Kacey Musgrave’s Follow Your Arrow for a modern twist, Kenny Rogers’ The Gambler for a sing along, Dolly Parton’s 9 to 5 for a dance, Jon Denver’s Country Roads for the traditional torches in the air and a medley to finish.  Even the drummer was encouraging an encore, duly delivered by the whole band lined up at the front of the stage and the audience on their feet and dancing

Nobody wanted the show to end – least of all those on stage, but the party continued with a mass meet and greet in the foyer, allowing everyone a chance to tell all concerned what a great time they had!

Whether a die-hard country fan, or just someone who loves the well-known songs, A Country Night In Nashville has something in it for everyone, evidenced by the huge variety of ages and headwear in the crowd.

In the future changes may be made to the set list, I loved the show as it is but am excited to see what classic and contemporary songs they add in future 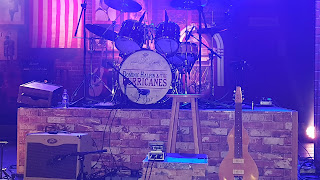 The tour continues, and if there is a date near you, you shouldn’t miss your chance to catch Dominic, Shelley, Donna Marie and the rest of the Hurricanes on stage! 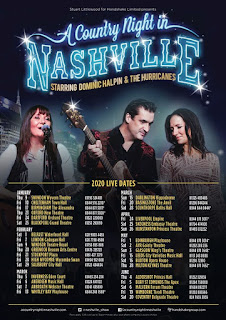 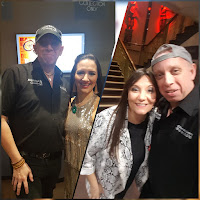 Posted by Silverball Leisure at 4:42 PM No comments: 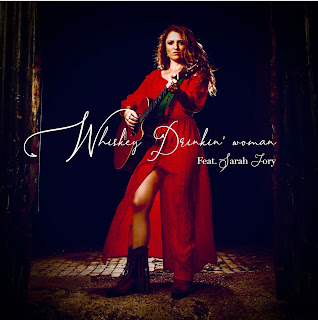 If you’ve heard Kezia’s fabulous EP “Dead Ends and Detours” you will have heard the little teaser track for Whiskey Drinkin’ Woman…and now the single is about to be unleashed in full.

Very much putting Kezia’s voice front and centre, Whiskey Drinkin’ Woman is – unsurprisingly – strong, loud, in your face and powerful!

With hints of UK folk singers KT Tunstall and Sandi Thom, this track really shows off the power and strength of Kezia’s voice.

A song about power, a song about a woman who knows what she wants, what she deserves - and she is going to get it!

The instrumentation behind the vocal is also superb – with a foot-stomping beat and the incredible slide guitar of another powerful woman – Sarah Jory. The guitar, the beat, the voice all combine to create what will no doubt become a festival anthem 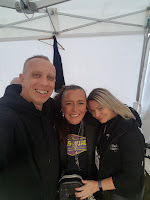 The combination of Kezia and Sarah couldn’t have been any more appropriate for the emotion behind this song, and their pairing is an absolute thrill if you have ever seen either of them play live – with now the hope that they may combine for at least one of the festivals this year.

Dead Ends and Detours was always going to be a hard act to follow – but Kezia has, if anything, moved up a notch!

Pour yourself a strong one - and one for this Whiskey Drinkin’ Woman – and enjoy this great new song from the Female Artist of the Year Kezia Gill.

Whiskey Drinkin’ Woman, the new song from Kezia Gill featuring Sarah Jory is released on 24 January on all major platforms. 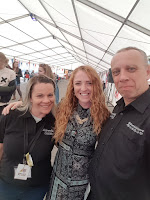 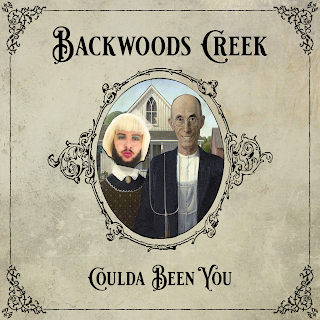 The musical ability of Backwoods Creek is highlighted from the start of this track with an almost staccato guitar intro accompanied by the drums; it’s 17 seconds before the vocals begin and lets us know that despite the good old fashioned country favourite of lost love, this guy is doing just fine.

Not only has he moved on, but in fact, he points out all the things the girl is missing out on because she didn’t care enough.  Lovely smooth singing from Jamie with beautiful guitar notes emphasising points in the lyrics.  Your ears are in for a treat when Jamie holds the note on “you………….”.

Back into instrumental, I like the clever little studio tricks to add in the ‘Should have seen her face’ and later in the song the spoken, more grown up comment.
Back to the vocal, he sees her in the arms of another man and reflects in the music, then realises he never cared for her.

Despite the content it’s an upbeat track, you are waiting for the twist in the lyrics but it never comes, instead you are treated to Jamie holding the higher notes and the final guitar riff which feels like punctuation, ending the song and the story.

Don’t you regret anything and go out and get the single when it’s released at the end of the month ….

Coulda Been You, the new single from Backwoods Creek is available for preorder now ahead of the release date of 31 January 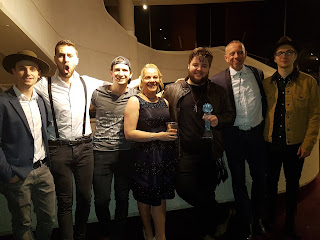 Posted by Silverball Leisure at 4:40 PM No comments: