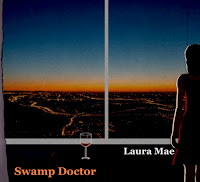 Laura Mae opens with a beautiful acoustic guitar with strings to open, and then that voice, oh my word that voice.  Deep, husky, you can smell the tobacco, taste the whisky and the dirt from the trail when Alex MacLaine starts half singing/half speaking the lyrics.

In case the song didn’t sound Country enough a pair of female voices come in to support that gruff lead vocal.

Laura Mae sounded southern & old fashioned for a fallen Alabama soul suffering still and seeing the dusk of life for all it means to her. I was inspired by the simple arrangement and harmony of southern folk songs, often with one guitar and two voices.

The style of this song immediately transports you back in time,  to the Country and Western era of rugged cowboy types  where saloons offer the only entertainment in those dirt road towns; which is fitting as the story itself is a look back, the life of Laura Mae.  Laura Mae was once young and pretty, and even though she is no longer either of those, she is turning grey along with the skies, but she still tries. Life is getting harder and she is becoming wearier, but the drink helps her forget. She isn’t brave as the young girls thinks, but just carries on and tries to recreate her youth.  It is important for her because – due to circumstances – Laura Mae is a lady of the night.

The video for the track is a hand-drawn animation by Hussam Aamir that depicts Laura Mae in a state of self-isolation as she contemplates life, her actions and how the world keeps turning without her engaging in it. However, the imagery is all there in the song, the picture all too clear.

Although it is a sad song, about a sad life there is still that glimmer of hope for Laura Mae because she has never given up – although the ending seems inevitable. Typical country, life often throws you a bad hand, there is nothing to do but get on with it.

Laura Mae, the new single from Swamp Doctor is available on all major digital platforms on Friday 26 June 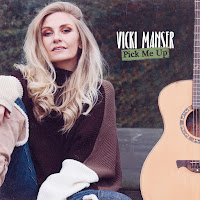 Vicki Manser comes to us via the world of musical theatre where she has appeared in the West End and touring shows.  This is quite evident when you listen to her debut single Pick Me Up, as her voice shows beautiful control and range as the song progresses.

The song opens with just an acoustic guitar with a hint of mandolin and then comes Vicki’s soft, almost breathy voice.  Throughout, the instrumentation – adding in drums and electric guitar – gently supports and highlights the vocal so that your full attention is on the words and sound of the voice, the pleading for help from someone who is experiencing personal trouble and doubt and is looking to that one person who can “Pick Me Up”

It is a country inspired song, although more toward that folk end of the spectrum, and is a co-write by Tim Prottey-Jones, Demi Marriner and Dan Weller, very well known names in UK Country, and Vicki herself cites the influence of family in her love of Country Music and Bluegrass

Country and Bluegrass has always played such a big part in my life and I am so excited to release my debut single. UK Country music is forever blossoming and this is just the start for me, so expect a lot more new music to come from me!

Well Vicki, if this is your first single we can’t wait to see what else you do!

Pick Me Up, the debut single from Vicki Manser is available on all major platforms from 12 June


Posted by Silverball Leisure at 9:30 AM No comments: 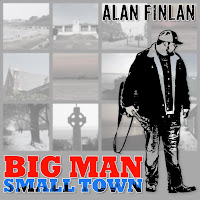 Alan Finlan’s new EP is part anthology, part new material – it is the three singles that he has already released (Whiskey Eyes, Battle of the Bands and the title Track Big Man Small Town) plus three new tracks Alan tells us “because I couldn’t wait to release them as singles!”

Those new tracks are

Cowboy Truth
The title suggests,  this track is very country, giving a good life lesson about relationships, work and the way to live your life. Its upbeat with some great guitar work under that slightly gruff vocal.
There is a lovely chorus that will stick, the intention behind the song is that a father tells his son “If you want to wear the boots, you tell the cowboy truth”.
This and the following two songs give the impression that Alan is starting to find and acknowledge his own style in the studio

No Money By Monday
Very much vocal driven to start with a big dual electric guitar break coming in before we return to that vocal/acoustic verse. It’s a working man’s tale of working all week, to spend all your pay over the weekend. The instrumental section lifts the energy within the track. Guitar picking adds a nice touch.  As the song progresses it highlights Alan’s vocal range – soft here, raw and edgy there.

Making Your Mark
An unusual opening; you’ll be transported to an old Irish bar, someone has a hand drum whilst the other tap out the beat, and arms are swinging, mostly linked with a Guinness in them. Its reminiscent of the music of the Saw Doctors.
With a squeezebox and some plucked strings adding to the overall effect it’s a little different from Alan’s almost trademark gruff country but we are starting to see that his recorded music is a little different to his live performances, however despite the change of style here it does get closer his live energy and is quite a fun song to listen to 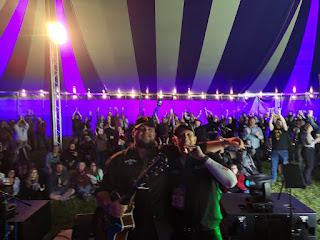 Posted by Silverball Leisure at 4:12 AM No comments: 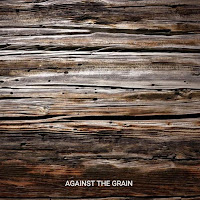 Tommy’s done it again – locked down in his restaurant he has recorded a new song in one take.  Having not been recorded with the luxuries of a recording studio it has a slightly rough edge to it – but that just serves to add a certain grittiness to the track and to his vocal.

It's Tommy with his guitar and his voice with a gentle string track behind, and he is playing that guitar like he really means it!  Soft and gentle music suits everyone’s mood in these circumstances, the long opening provides the opportunity to reflect and then in comes the voice that seems to suit the bleak view outside the window.

The song sounds raw and honest – Tommy called the recording “warts and all” and in a way that seems to sum up the theme of the song – take me as I am.  The storyteller knows that he isn’t perfect, but that’s just how he is, he “goes against the grain”

Against The Grain, the new single from Tommy Taylor is available now to stream 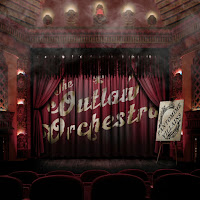 We were thrilled to be sent the new album Pantomime Villains from The Outlaw Orchestra as we have of course missed the chance to see them for the first time at this year’s Buckle and Boots festival.  Describing themselves as “Heavy Grass” I’m not sure that mere words on a page can do their music justice!

The album opens with Take A Bow which from the start is thigh slapping toe tapping southern music.  The harsh sound of the electric guitar is beautifully underlined by the picking of a banjo to give a fascinating sound.  Chicken Fried Snake, the first single off the album, opens with just a plucked banjo punctuated by a beat, which is then joined by electric guitar and pounding drums to truly demonstrate the musicianship of this “orchestra” , combining with stand up bass and a lap steel.  The vocals, when they come in, are very 70s rock – imagine motorhead listing a very unique takeaway menu! Hanging Tree takes us straight to the bayou with its fast banjo, faster singing and duelling guitars. 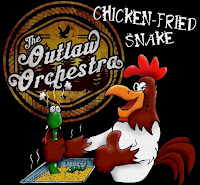 Whiskey Drinking Liar is a warning tale - “Should have listened to your Momma”– but at least he is being honest! This track is mainly driven by the vocal and you can picture the denim clad bad boy sitting at the bar with a half empty bottle of bourbon and a shot glass.  The vibe and the energy are constant through the whole album though each track has its own styles from the guitar driven Arabia to the more rockabilly than hillbilly Jumpin’ Jive – its hard to sit still thorough this one!

It Happened Again is a more measured song, about needing to score – but his addiction is to guitars!  Clever and humorous – and probably relatable to many musicians -and their partners!  Voodoo Queen has a Spanish style guitar opening that goes on and on followed by  a slow beat of banjo and drum. Growly voice, stand up bass, there is a smoky feel invoking the spirit of old time Jazz Clubs.  The ending speeds up to almost a flamenco with much clapping and foot stamping called for.  Too Much Wille Nelson again has its own style and its own humour – it’s a bit Jimi Hendrix and it explores the different ways of listening and emulating the habits of some of the Country Greats.  The album ends with possibly the most “country” sounding song – Send Some Whiskey Home has less rock and bluegrass influence and a real chance to appreciate not only the musicianship but also the quality of Dave Roux’s voice

Whether playing the big barn stage or the more intimate party atmosphere on the paddock stage it is sure that the Outlaw Orchestra would have raised the roof at Buckle and Boots or at any festival.  It’s Heavy Metal meets bluegrass, it’s a little bit bonkers, and you might feel like they don’t take themselves too seriously. 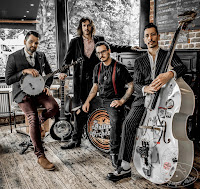 While my feet were tapping, my face was grinning the whole way through listening to this album


Pantomime Villains, the debut album from The Outlaw Orchestra is available now on all major platforms

Posted by Silverball Leisure at 12:40 PM No comments: