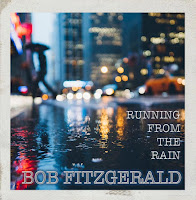 Bob tells us that Running From The Rain was initially inspired by a motorbike journey...

...in which the inclement British weather loomed large in my wing mirrors, the rain seemingly chasing me no matter what. The chorus hook just came to me as I rode, I pulled over immediately, took out my iPhone and sang it straight in. The Storyline lyrics tell a universal tale of driving on searching for better times yet to come; “Whenever it pours down on me, is when I make my way. I’m headed out where the sky’s oh so clear, turn my back on the grey. Yeah, I’ll just keep running from the rain.”

This debut single starts with a recording of the rain; we hear the guitar strum, a lightness of music that promises something good and then the engine starts, and the song takes on a different beat. I feel a dramatic edge.

The drum staccato effect ends each sentence, adding an arrogance to the character, he’s telling us not to ask, he doesn’t plan to stick around, and it’s only a matter of time before trouble will rear its head.

There’s the country element of loss but not this guy; his love will leave scars, leave you feeling bad as well as wondering if you can ever win.


He’s running from the rain, but life too. 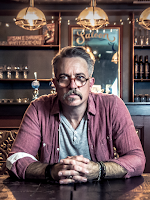 3 minutes in we are treated to a 15 second instrumental section that recalls Brad Paisley and Keith Urban plying their trade and producing something spectacular from the guitar.

The single was released Friday 6th March and went straight to number 2 on the iTunes country chart - but the rain slowed down Silverball Country!

Hide in the car, switch up the track and tap along.

Running from the Rain, the debut single from Bob Fitzgerald is available to download and stream now on all digital platforms.
Follow Bob on Facebook
Posted by Silverball Leisure at 1:46 PM