Every year the tiny island of Cumbrae, just off the west coast of Scotland is home to the Millport Country Music Festival. This year was the 25th anniversary and we (Silverball Country) were invited along. In fact we had the pleasure of looking after a stage – Cactus Jack’s. It may be one of the smaller stages on the compact site but it had a party atmosphere right from the start. 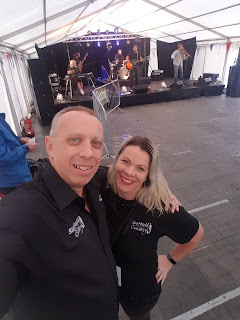 Friday
Amid torrential rain Cactus Jacks was the de facto main stage, since Nash Field as an open air venue wasn’t open. The line up was certainly enough to temporarily claim the title of main stage – as the three acts were all headliners in their own right!

Mr Millport himself, Gavin welcomed everyone to the festival in very damp attitude, in fact dripping from his cap onto the stage, showing that the weather wouldn’t spoil the fun.

Simon James
We were thrilled to welcome our first act onto stage, Simon James and his band, the Deep River Pilots, which included a guest pilot in the form of the birthday girl Sam Coe on Keys and backing vocals.  We have a close relationship with Simon, having recently reviewed his new album and album launch gig, so it was with great pride that Francesca took to the stage for her own first festival intro.  Simon did not disappoint, delivering a fabulous festival opening, playing tracks from that new album.

Morganway
Second act on the Cactus Jacks stage was Morganway – unfazed after the minor drama of changing an entire sound desk minutes before their show time!  The whole band were happy to wait before storming the stage with their own brand of #RowdyFolk. We first met Morganway at Country In The Afternoon and were impressed by their energy at that show – and this demonstrate that they have that level of energy at every show!  SJ’s vocals soared across the tent, Nicole played her fiddle so hard that she broke a string, and all the boys seemed to be competing to see who could go craziest without missing a single note – spinning, stomping, dancing and even, at one point, stepping on a spare guitar with fortunately no damage! 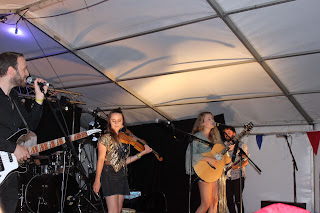 Sarah Jory
Sarah is an incredibly talented musician, playing pedal steel and slide guitar with gusto and energy that  belie her 40 years in the industry.  She is also one of the absolutely nicest performers on the scene with a calm outlook and friendly, unflappable approach.  After line checks she simply says “lets do it” and the show is on.  Rik, doing her stage intro, could not find words to do justice and simply said “Ladies and Gents – Sarah Jory” allowing her music and her band to do all the talking.  One of the many highlights of her set must have been a cover of Brad Paisley’s “Nervous Breakdown” – a high tempo piece giving her pedal steel a work out, and making Luke Thomas on lead guitar break a sweat! There was banter between the two about who you should vote for, as both are nominated for the BCMA musician of the year. Sarah finished her set with a rendition of Amazing Grace that sent chills through every member of the audience. 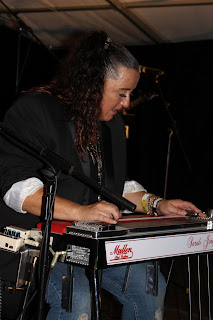 We couldn’t let the night end there, we knew those on the island liked to party so we had planned to keep the music going to curfew, midnight, with a Silverball Country afterparty.
Having to follow Sarah Jory was no mean feat, so Francesca crafted a playlist to follow of “Powerful Women In Country” in Sarah’s honour – an all female disco that was well received by the late night party people in the tent! 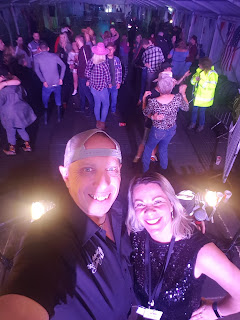 Millport Day 1 - done!
Posted by Silverball Leisure at 9:25 AM