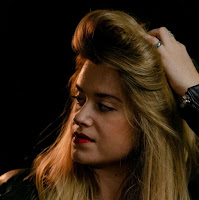 Love Is Not Enough is the debut single from up and coming singer Songwriter Sabine.  Settling down with my advance copy, headphones on, I realised that I have no bio, just the song.  At Silverball Country we actually prefer to review without seeing anyone else’s opinions (often not even each other’s) but on this occasion I know very little about the singer apart from her voice and her words
And what a voice, and what words!

Sabine possesses a unique, distinctive voice, with a definite mature feel to it.  “Mature” is also a word I would apply to the song lyrics.  So many Country songs about love are quite plaintive, covering heartache, missing you etc, whereas “Love Is Not Enough” is about a relationship that is over, a life that must go on – but without you.  It is a song of hope and growth – but from a purely personal perspective, and I found that a very powerful take, but delivered in a very meaningful way
The line

sums this up very eloquently

The sound itself reflects that almost understated personal strength and power.  Accompanied by some strong instrumentation, the mix and production by the guys at Puzzle Maker studios is spot on, ensuring that Sabine’s vocal is very much to the foreground whilst still retaining the backing underlining the song. It’s not often that I focus on the production and engineering on a song, but in this case the studio certainly deserve praise!

Overall Sabine has written and performed a really listenable debut song, one that will surely get her noticed and will maybe make listeners think about their own lives, their own relationships and their own priorities – after all, you owe it to yourself!

Sabine can be found on Facebook, on the road playing acoustic sets  in Oxford, London and Alcester. and in October she’s heading out to Texas, where she’s been invited to play at the Texas Sounds International Country Music Awards in Jefferson, stopping off at Nashville before returning to the UK.

Love Is Not Enough is available to pre-order now

Posted by Silverball Leisure at 10:44 AM