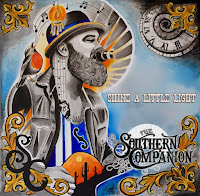 Surprisingly, although I have heard Darren sing at a songwriters round, I have not previously had the chance to hear his band The Southern Companion, so for me this was an eagerly awaited (rearranged) date

After the acoustic opening I settled back to enjoy this six piece band, artfully crammed into the intimate Kitchen Garden Café 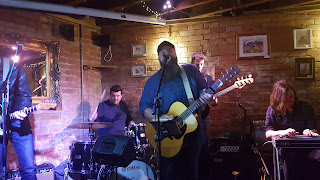 From the first three words from Darren’s mouth I immediately thought “Springsteen” – that slightly gruff country/rock sound, but then you realise that whilst Darren sounds a bit like Springsteen, he sounds mostly like Darren!

As a contrast to the stripped back openers, The Southern Companion’s louder, well balanced sound enveloped me like a warm hug – as does Darren’s singing.
The underlying style is that of the classic American story teller, genuine feelings of real life where you feel that you can see the story rather than just hear it, again evoking comparison to Springsteen, Billy Joel, Phil Vassar which befits Darren one being described as “To Country to Sing Blues”.  Whatever label you want to attach, Darren and the band are simply genuine

Although the tour is to launch/highlight the new Album “Shine A Little Light”, we were treated to songs from across the full spectrum of the Bands earlier material, and even from Darren’s previous (Blues) band.  The title of the Album comes from the song “Can’t Get There From Here”, as Darren himself described it “Its important to be god to each other. Instead of covering them in darkness. Shine a little light”.  This is very much  reflected in Darren inviting a range of local artists to support the tour in different venues. 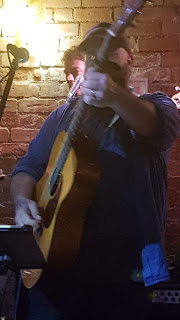 The first single off the album was “Songbird” which is a beautifully emotive song, influenced by his daughter’s first day at school – and being a husband and father is a theme throughout Darren’s song writing. Despite being about a father's fears the song is upbeat, but perhaps that's how it should be - worry but be outwardly upbeat and positive

“Can I Get a Witness” opens with just keys and Vocal, really highlighting the quality of Darren’s voice, the lap steel underlines it as the song builds, by contrast “Already Gone” was performed with three guitarists all combining their instruments and voices for a powerful beginning before the drums, keys and lap steel joined in 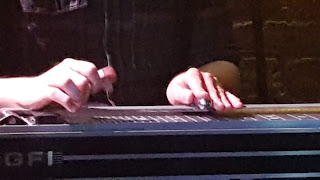 “Can’t Get There From Here” felt like a showcase track, certainly has the power to be a title track and really demonstrated all six musicians combining to produce that Southern Companion sound

Track 1 on the album “Billy’s Brother” will really hook you in from the start, but for me the whole evening hooked me – from Darren’s voice to the team behind and around him, and the song writing that has produced this album
In a world where musical careers are based on a gladiatorial thumbs up, a big red cross or a chair spinning round, a hard working band like The Southern Companion deserve success. Three albums in, proper musicians coming together to produce a fabulous balanced sound performing well written songs reflecting real life.

The Southern Companion's new album “Shine A Little Light” is available now, and should already be in your collection.  If you’ve missed this tour  you can catch the boys rocking the main stage at Buckle and Boots this year on Sunday evening – I’ll see you there at the bar! 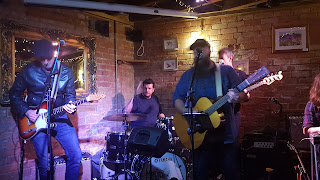 Rik finally got to see the band - and now has the album on repeat
Posted by Silverball Leisure at 7:57 AM