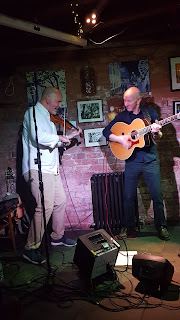 One guitar, one mandolin, one violin, two talented musicians and a rendition of Postman Pat. What more can you need for a night out? The venue was the quirky little Kitchen Garden in Kings Heath Birmingham, and the musicians were a mostly folk duo of Kevin Dempsey and Joe Broughton.

I was in two minds about where to post this review, but when you listen to some of the traditional folk songs, and the way they tell stories, it is clear that English Folk and Country music have a shared root that is easy to see with some of the UK country artistes

Joe Broughton is familiar to me as the leader of Birmingham Conservatoire’s quite stunning Folk Ensemble, but as a duo of 20 years these two have a stunning history of their own – having played with Fairport Convention, Mary Black, Joss Stone, Percy Sledge, Bellowhead and many more.

The evening opened with a cautionary tale “Wicked Polly” originating from the Ozarks which served to set the tone of songs from around the world, a casual setting and the way that Kevin and Joe perform and interact, with Kevin on vocals and guitar and Joe alternating between fiddle and mandolin

Not all the offerings have words, our next two were instrumental only, with Joe accompanying at one point with a wonderful display of pizzicato violin playing

We were treated to a long and very involved story about Kevin trying to trace a particular 17th Century English song which was laugh out loud funny especially when it transpires that the song is actually rubbish so he doesn’t perform it! Instead he sang “Pride of Kildare”
In true folk style the singing is almost mournful in style, and the fiddle comes in as almost a second “voice” giving that truly ethereal folky counterpoint to the guitar
It was then time to pick up from the “folk misery” into an Irish reel when the mandolin came in to replace fiddle – and all through the evening foot tapping is obligatory, and practically unavoidable. 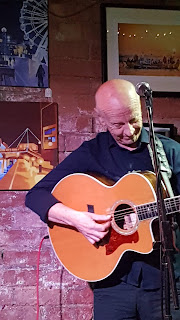 Kevin comes across as a serious musician albeit with very light-hearted tales), while Joe never seems serious, but is seriously talented and clearly enjoying himself. Watching Joe, he clearly “plays with joy” and never seems to actually have both feet on the ground!

Joe told us for the next song – specially written for an Italian radio show – that he would only play two notes on the mandolin.  There were in fact others, but those two notes were incredibly effective.
As Joe tuned up his fiddle, Kevin told us the story of setting the poem “The True Story of Resurrection Jack” to music, but instead our duo played a folk inspired version of the theme to “Postman Pat”, accompanied by many members of the Folk Ensemble lustily singing every word! 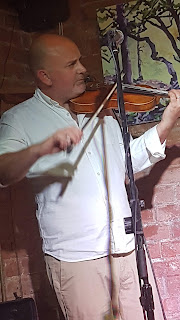 Kevin opened the second half with a solo rendition of “Leaving in a Hurry Blues”.  The guitar intro was utterly mesmerising and throughout the song I was not sure whether to focus on voice or guitar, opting to let the combined sound just wash over me.  The set continued with “Two Stick Mountain”  - here the banter between Kevin and Joe felt like an old married couple – clearly a pair of performers comfortable with each other after 20 years performing
Finally we got to hear “Resurrection Jack”, followed by a sing along soul song “You Must Believe Me”, then the story of a film score they have composed “Los Cojones” (They tell the story of the film far better than written word can convey) which featured a very classical/Spanish guitar style from Kevin. 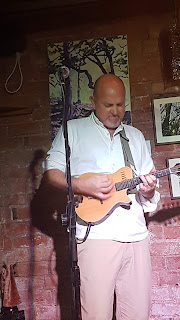 The finale was a “whirlwind worldwide medley” but this was not enough for the audience, so after a very unconvincing “stage exit” the night ended with “Until next time”(But don't forget there might not be a next time)” - a title which works far better in Italian. For this instrumental piece the violin is very much singing the lead, so you can almost hear the words… 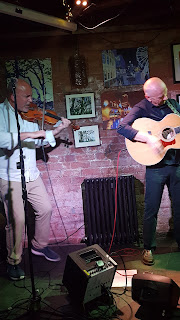 The evening wasn’t *just* folk, it wasn’t *just* a duo – it was two very talented musicians playing with joy, enjoying sharing their music and enjoying being in an intimate, relaxed setting.

Watching this performance, you can see where the Folk Ensemble get their infectious performing style from, and it was a joy to see traditional and original folk music effortlessly blended and performed. Look out for this pair – they are sure to be around for a long time to come!

Rik went along and wrote this one
Posted by Silverball Leisure at 8:16 AM