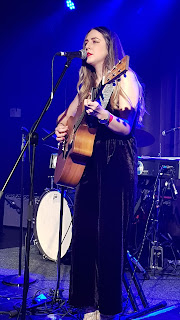 If you're going to a gig, go early and catch the opening act!

I made a trip to the o2 Academy in Birmingham on a windy Wednesday night to catch Elles Bailey on her current tour – but also to see Demi Marriner playing the opening set.  Demi is well known on the UK scene and can often be seen supporting other artists either with her full band or as a solo performer

The Academy 3 is a fairly intimate room with a capacity of 250 and a fairly small stage, which was already set up with all the instruments for the 5 piece headline band.  When Demi came on, just a girl and a guitar there was a danger that she could be a little lost amongst all that kit but her voice, her music and her personality were more than strong enough to grab the 30 or so people in the room 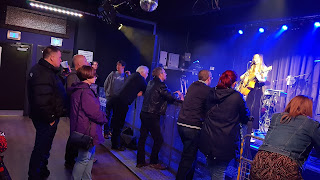 The opening song was “Stay” – a mournful song, apologetic in its lyrics but still catchy – in fact most of Demi’s songs have a catchy chorus, so by the end you are singing along as though you've known the song for years, even on a first listen

The set consisted of songs from the EP “Dandelion”, the EP “Tales” which was recorded on just one microphone and some new songs – one only a week old!

It feels as though we are supposed to always label the genre of an artiste, but with Demi it isn’t straightforward.  She is quite Country, quite Americana, sometimes bordering on Bluegrass with her final song “Sins” and some of her performance is very much in the style of the classic female singer songwriters – think Beverly Craven, Julia Fordham, Judie Tzuke – although her snakeskin boots do scream country! 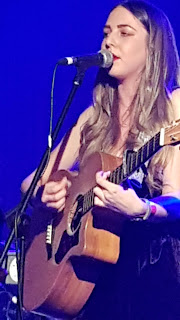 Working through her songs – “One Way Conversation”, “Sunday Morning Alone” (with some very high notes showing Demi’s range), “What Am I Doing Here”, “Distorted Desire” “Cold Coffee” Demi displayed increased confidence talking between songs but still with that trademark humility whenever she gets applause, with her quite shy “Thank You Very Much” each time, but when she sings you can really feel how confident she is and how much she loves her songs and singing them.
We were treated to that brand new song “Little Boy” which had a really country theme – advice to the newest baby in the extended family, from the previous youngest family member, dedicated to her new baby cousin

Demi is currently quite busy supporting various tours, but will shortly be back in the studio recording new music – and then we can hope that she will be taking centre stage where she rightfully belongs on her own headline tour

Catch Demi on Facebook, online, on tour(s) or just buy her EPs and enjoy her music

Posted by Silverball Leisure at 6:29 AM