Gig Review - Demi Marriner, Robbie Cavanagh and Gasoline & Matches In The Round (as support)

To the Kitchen Garden Cafe Birmingham for The Southern Companion - where the opening act was a songwriters round...

I’ve written before about Songwriters rounds and about opening acts – and this was a combination of both!  Supporting the Southern Companion on their rescheduled date were two of the power couples of UK Country – a bit of a Double Date according to Steve Marks – but to only describe them in those terms does them a great disservice.

On the left side of the stage were two singer songwriters who happen to be a couple but are skilled writers and performers in their own rights.  Robbie Cavanagh and Demi Marriner sang new songs for us, some of them written together and some older songs but they do combine with Demi singing backing for Robbie, Robbie accompanying Demi on guitar which demonstrates that their similar vocal styles combine beautifully. 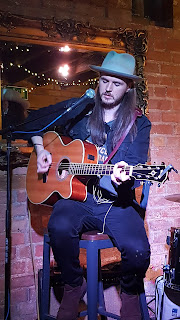 Having previously only seen Robbie perform with his full band it was a delight to be able to really focus on his voice and style, listening to him sing his song “Fare Thee Well Letter” (a really emotional song!) his voice was reminiscent of some of the great male songwriters from the 70s – think Jim Croce! 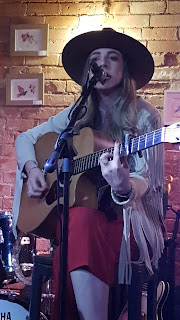 Demi and Robbie came together again at the end of the set to perform “My Grave” from their sampler EP “This House” which gave the chance for Demi’s voice to really soar as they sang individual parts rather than just harmonies.  A beautiful song which deserves inclusion on a future album, but I think they will have to fight over who gets to release it!

While one pair gave us newly written music, on the right hand side of the stage we were treated to newly recorded music by Gasoline and Matches
Sally and Steve also combine their voices and guitars to a stunning effect, with their style being more on the rock side of country – powerful vocals with quite stunning guitar. 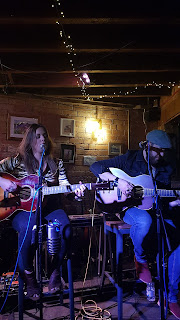 Following up their debut EP, Gasoline and Matches are in the studio putting the finishing touches to their first album, featuring tracks that have become absolute favourites at their gigs, including the regular song writers round that they host in this venue. New tracks include “Patient Wolves” which went almost straight from writing to recording and the very spirited “Smiling Viper”
“Tequila’s A Healer” became a three-part harmony, as Demi joined in with the “I Love You”, a demonstration that there is no line between the performers, and voices can combine, even briefly, to great effect!

With new music coming from all three, and all performing at festivals around recording commitments we have plenty to look forward to – and perhaps some more double dates too!


Rik attended this one to write the review and be the awkward third wheel in the corner....

Posted by Silverball Leisure at 6:17 AM