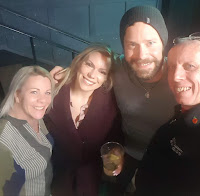 Having spent time with Lewis while he was at Buckle & Boots in the Summer and during this, his second visit to the UK, we took a few minutes pre-show to find out a little bit more about him and his career.


Starting at the beginning, Francesca asked where Lewis found his love of music

I grew up in a musical family – Mom had a group called the Lewis sisters and they taught my dad to sing. Music has transcended down the family, my brother sings, even singing in the car 5 years old to Linda Ronstadt and Aaron Neville and growing up singing in church, so from a young age I’ve always loved music and after moving to Nashville I knew this is what I’ve got to do

As a solo artiste, when writing a song – who do you turn to, to say whether the song cuts it?

I turn to myself. If it sticks to me then I definitely want to cut it. I’ve written 1000’s of songs. When I go to a room to write, I’m writing for the song that comes out that day

Lewis has a rather well-known brother in Lee Brice so we asked about the dynamic there – how much support does Lee give you?

I get a lot of support from him, we work together all the time. He has been my executive producer, we write together, I go on the road to shows with him. It’s a help/help thing, and he is a little further on than I am so I use him as a sounding board

When Lewis played at Buckle & Boots it was his first visit to the UK, this tour has been his second – so we asked what he thought about the UK and the UK country scene

Having seen Lewis perform a stunning act headlining at Buckle and Boots, and also playing intimate gigs – which is the real Lewis Brice?

I’ve done both my whole life, I cut my teeth doing acoustic shows I feel really comfortable doing those, but I really get off doing the full band show when I can run around, I have a lot of energy to give out there and I try and give out all the energy I can get back, its kind of a mix between the two, because if it is just me and my guitar I’m still running around playing as hard as I can.

With all this experience playing and being on the road, what would Lewis consider to be his dream venue?

I’ve never played there, but Red Rocks in Colorado. Its just a majestic venue, and that drives you to do what you are doing

So with two visits under his belt, and a clear love for the UK and UK listeners, Francesca asked on her own behalf, and on behalf of all fans of Lewis Brice - When is your UK tour?

This is the last time playing in the UK this year, but maybe setting something up for next year, hopefully in the spring.

We’ll hold you to that Lewis!  You clearly love the UK, and we all love you too – hurry back! 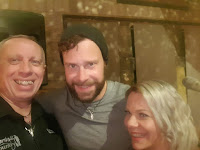 Posted by Silverball Leisure at 8:50 AM