Buckle & Boots managed to bring together into a small room in the Sunflower Lounge, central Birmingham the amazing talents of:

Using the “round” style that is popular at the award-winning annual country music festival, just outside Manchester, each of the artist takes turn to sing a song and tell the audience more about it.  However, it is hard to keep a good musician down and you will see they all support each other and play along to each other’s songs.

Lewis probably set the theme of the night with his first song: Best Ex Ever.  A popular topic continued by the others which could have quite happily seen this tour renamed ‘The Ex’s Tour’, strictly for those over 18.

This is a group that has spent time together; some are old friends going way back and there are several writing combinations within the group. History combined with the tiredness of touring, made for a night with slight lower barriers, lots of banter, back handed compliments and the odd risky remark.  The Jack Daniels may have also played a part too; obviously there to help Kristy work through her cold (nobody would have noticed she was under the weather, giving 100%) but she reported on Jon’s enquiry that it had made everyone in the audience look beautiful and they had doubled in number.

Kristy flipped her violin on its side and plucked it guitar style for Point Of View - a quirky little song where the duo sang about each other; basically, Kristy likes to talk and Jon's too cute to stay mad at.  This was very fitting in the relaxed atmosphere and took the banter to a heightened level. As Gary explained in his introduction to Bumpin Into You, that his downfall were five foot four brunettes, the biggest laugh of the night went to WMM’s comment “if they were five foot five, they would terrify you!”.

No country gig would be complete with a redneck reference, and of course these guys didn’t disappoint - they referred to the family tree so close there were no branches.  Kristy in perfect melody followed on from Gary’s song with the line “that’s my cousin!”.

Earlier in their tour, the boys ganged up on Kristy and gave her stick for how much she talks and what she says; she was fighting back tonight. She told the crowd Jon’s major was in line dancing, a comment stemming from WMM’s offer for the audience to dance along in the small space just in front of the stage. We might have given him the wrong impression by creating a line dancing routine to his song Missing.

We have to thank Gary for looking after the group and WMM for his honesty. After losing a pick borrowed from Gary, he leaned across and whispered to Jon “have you got a spare pick?” His response, “no I borrowed one from Gary”. He leaned further and whispered the same question to Lewis, resulting in the same response “I borrowed one from Gary”. There was a period whilst Gary and WMM shared a pick but finally gave in and told the audience what happened, asking if anyone had a spare pick. Luckily Dee D James was in the audience and could assist!

Gary told us that the current trend in Nashville was to write songs about what's happening in the moment.  I think everyone could relate to the songs sung, there were a couple of requests made earlier and honoured; it was nice to hear WMM sing The Chair – originally by the King, George Strait.

With the round over, there was one last treat in store, a group rendition of Friends In Low Places. Then in true Buckle & Boots style the artists mingled with everyone at the bar. 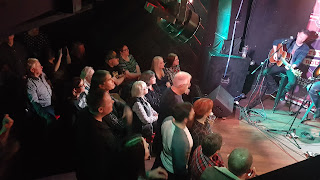 Buckle & Boots (Karl, Laura & Gary) - thank you so much for bringing some of your best performances from this year out on the road. You have magically recreated your festival feel but made it winter friendly, namely, suitable for the indoors. Nothing has been lost in the atmosphere, the friendliness, the drinking and above all an amazing music experience.
Posted by Silverball Leisure at 2:19 PM