If you only associate Cumbrae Promotions with the fabulous Millport Festival each year, you are missing out on some incredible events on a slightly smaller scale – although certainly not smaller quality!

The latest offering from Gavin and Christine was an “Intimate Nashville Songwriters Round” in the beautiful and historic Olympic Studios in Barnes, SW London. In order to fit everyone in, it really did give it an intimate feel, everyone was in touching distance including the artistes, with 3 rows in a semi circle around the microphones. There was to be no crowd movement during the set to sneak to the bar. Everyone had to move together and mind the cables leading to the poor sound guy squeezed down the side of the bar.

The artistes on the bill were quite a choice too – frequent visitors to the UK American Young alongside their close friend Lewis Brice on only his second visit to the UK, following his appearance at Buckle & Boots earlier this year.

The setting seemed to really suit American Young, although they are quite comfortable headlining a festival stage, the intimacy really brought out Kristy’s violin playing and Jon’s almost delicate vocal, much of the time moving away from the microphone so we could hear them in their purest form.  Next to them Lewis managed to deliver a big stage performance whilst standing still!  Even in this small room, Lewis showed that his style is capable of filling a room without overpowering it.

Rather than a traditional round, all three, whilst alternating the lead, were clearly having a fun time jamming together, joining in with each other’s songs and swapping banter – mostly at Kristy’s expense with some good-natured teasing from the boys flanking her.  We were treated to a real mix of new material, older songs, favourites, unreleased material and covers.  Jon in particular seemed incredibly relaxed from the start, enjoying a glass of pinot noir whilst waiting for everyone to arrive and this set the tone for the whole evening.

The setting and the atmosphere felt we were part of a casual jam session not at a concert, there were no set lists, confusion over who was singing next, at least on Kirsty's part as she would start a story and Jon would interrupt, Lewis happy to go with the flow and wait. There were forgotten words, a little retuning, drinks passed forward and glances outside the room where Kirsty ‘s son Jesse was watching.

It seemed natural, a chat you have with good friends,  that Lewis sang a brand-new song and asked our opinion on whether he should record it. The answer was a resounding yes!

Kirsty said Lewis was the 3rd member of American Young, it was clear they knew each other well, Jon and Lewis frequently write together and therefore perfectly fitting to hear a smooth  rendition of “Just the Two Of Us” which then became “Just the Three of Us”.

Twice it was suggested that the singing had come to an end, but nobody wanted to leave; even Kristy called for an encore. Apparently not something artistes should do but absolutely fine with everyone so more songs were sung including slightly imperfect but utterly wonderful encore of Hotel California


Truly an intimate, unique and entertaining night of music, an unmissable event.  Cumbrae Promotions – you’ve done it again, thank you! 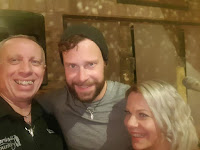 Posted by Silverball Leisure at 4:50 AM