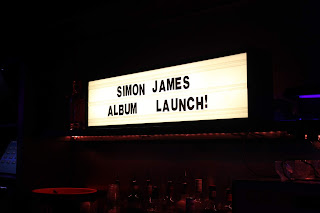 We listened to, and reviewed, Simon James’ new album ahead of release, so of course we had to be at the official launch to hear the new music played live.  Rik made the trip to Manchester’s Night People armed with Simon’s favourite sweets – Orange Smarties. 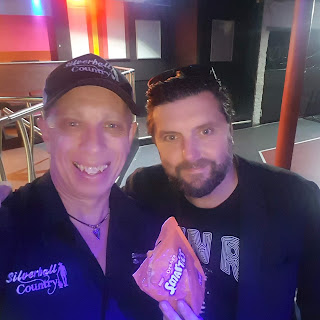 The venue itself was dark, moody and felt like a proper underground music venue – perfect then to showcase Simon and his new album.
Simon was supported – as ever – by close friend and label mate Sam Coe who opened with a sort of solo set – Sam without her Long Shadows, but accompanied by label boss Kevin on guitar. Sam played keys, Sam sung her new solo material and Sam was fantastic! 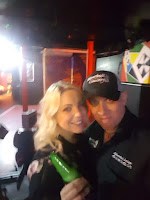 While I sat with Sam for a chat, Jamie Freeman took to the stage, and even in the green room we could hear how much the assembled crowd were enjoying his set

And then it was 9pm, and Simon James and the Deep River Pilots took to the stage.  It was a small stage in a small venue, but Simon and the boys absolutely filled it with a powerful performance.  Simon’s music is gritty, its gruff and it is mature – as one audience member commented to me, he couldn’t do this if he was 25.  There was a rowdy edge to the night, with – it seemed – half of Simon’s village along to support him this was never going to be a genteel listening party, but that wouldn’t be Simon’s style!  With his family in the room and Sam Coe on backing vocals Simon gave a great performance – his voice, the music, the band all coming together to create a fabulous sound. Stand out track Oh Honey just seemed so effortless as it flowed from the stage, Something Worth Fighting For was sung with real emotion – and Simon declared it to be his own favourite track from the album

The album is great, the live performance of it really did the writing justice – you feel the power, feel the realism. 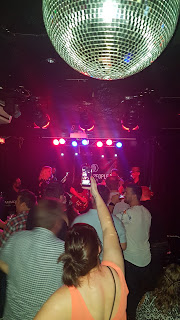 The evening ended on Ready To Fly which seemed so apt, especially as the album charted at number 4 on the iTunes chart that very day.  When Sam Coe called Simon’s Name after the final band roll call he gave the crowd a very happy, cheeky grin. 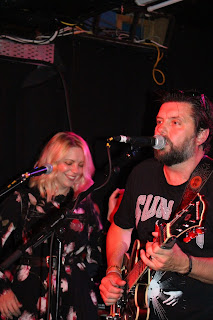 I took a rather sweaty Simon outside for a breath of fresh air and a chat after the show and asked him how it felt after launching his new album on the new label.  His reply

“exhausted and elated. It was a great gig, a really really amazing gig”

Simon writes from experience, as he says

Simon writes alone, but bounces off Sam, but in essence he writes for himself, and even if someone else doesn’t like it, he’s still going to write it.
Everything about Simon is authentic, influenced by what he sees, his time of life and by the music he grew up with – it is all very much real life.  Is start in music was at age 6 when his father was given a guitar as part payment for a bill. His sound is a mix of Folk, Country and Blues – all the bands and styles that have had an impact on him over the years.

On UK Country and song writing

The album is undeniable gritty, but the performance was “Happy in a Simon James way” – and Simon explained this very simply

“Its happy because I enjoy playing on stage”

Simon James has gone from An Ordinary Man, to Happy Ever After, and with this new album and his love of being on stage he is undeniably Ready To Fly

Simon James’ new album Happy Ever After on Ginger Dog Records is available now to download, to stream or to buy as a physical copy

If you are planning to catch Simon at Millport Festival, bring him Orange Smarties and a nip of Crème De Menthe

Posted by Silverball Leisure at 5:40 AM