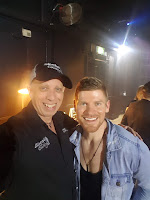 Sunday night may not be a traditional gig night, but with two great acts opening and a headliner that I was keen to see for the first time, at a famous local venue – why not?  Unfortunately, it seems that many people thought “not” as the Birmingham date of the Canaan Cox Long Way Home Tour was not quite a sell out.  However, the number of people in the room didn’t affect the performances in the slightest

First on the bill were the very local Gasoline & Matches.  It is quite clear any time that Sally and Steve take to the stage that it is where they feel most comfortable.  Playing a mix of their older music from their first EP and music from their forthcoming album, you could tell that both were enjoying perming and having fun on stage.  I’m sure that some of Steve’s guitar riffs get more complicated when he gets the chance!  Ending with the energetic Never Have I Ever and Smiling Viper, Gasoline & Matches were, as always engaging, entertaining and energetic, and are always great to see performing live.

After a duo to open, we were then treated to Danny McMahon with his full band.  Despite the size of the room and the size of the crowd Danny opened and performed as though he was playing a festival.  The energy coming off him was amazing, and he succeeded in encouraging all of us to clap along, sing along and – for the girls at the front – dance along to his music which included the first public, live performance of Pushing My Hands Down from his EP Boys Cry Too, which also includes the song When I See You – performed with real emotion on the night. 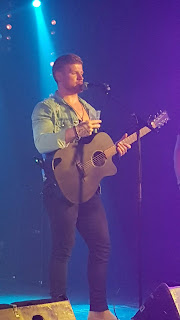 And so to the headliner. Canaan Cox.  His first post about Birmingham was “can anyone hook me up with a gym?” and having met him, I can see why!  Canaan is one of the most entertaining performers I have seen in a while – his stories between songs and the way he tells them were fabulous, clearly drawing on his training in musical theatre for delivery and life on the road for the content.  He’s the kind of guy you’d want to party hard with all night, and then sit listening to him sing while the sun comes up.

For his set, Canaan mixed his own original songs with covers, and mixed rocking out with slow, measured singing.  He went from FGL’s “Cruise” into Frozen’s Let it Go so smoothly that it took a moment to realise!  He also covered Dan & Shay’s “Tequila” the way it should be sung (without a clicktrack and after doing shots with the band” and then we had MJ’s “Billie Jean” – with a subtle but definite country flavour.  “What is he doing?” I asked Danny McMahon. “Anything he wants” came the accurate reply – and he can!  Canaan wants to party, and to rock out.  Wen he rocks he really rocks, but when he slows it down then it is more about his voice – and damn that’s a fine voice. 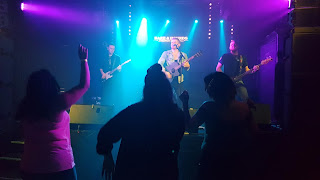 Although it was a small crowd it really felt like a party, and those of us who weren’t already Canaan Cox fans certainly are now!

Catch Canaan on his UK tour until 24 June https://www.canaancox.com/tour and check his 2019 album.

Or just find him in a gym….

Posted by Silverball Leisure at 10:35 AM