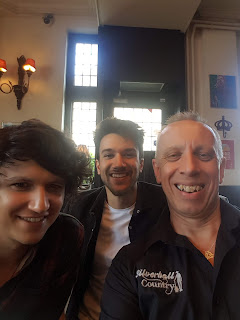 The Blue Highways rocked a hot Saturday afternoon in an iconic venue in London, taking to the stage on day 1 of the first Country In The Afternoon at Putney’s Half Moon. 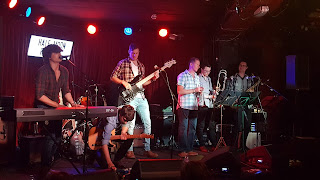 A band of brothers from London, the boys have been around music their whole lives as they come from a musical family- plus a bassist who plays music for the British Army!  Frontman Callum, with his loud vocals and guitar playing has quite the musical pedigree – a classically trained pianist, a church organist and a fan of Elvis Costello seems quite the enigma, but music runs through their very veins.

Billed as Americana, The Blue Highways would call themselves

“Rock with an American roots feel with an R&B style rhythm section.”

Whatever you want to call it, the band are on stage having fun and seeing what happens as the set goes.

I was greatly surprised that it is only a year since The Blue Highways appeared on the Emerging Talent stage at Millport Country Festival having only been together in this incarnation for only 18 months. With 1 EP released and their second single released the day before we met there are big things in the future with a busy summer schedule already organised.

As brothers – how is the dynamic for writing and performing?  Apparently this means that they can argue as only siblings can, but they can’t walk out, because the furthest they can go is upstairs to their bedroom! 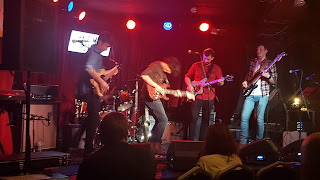 The new single formed part of their Country In The Afternoon set, and they invited Lewis Fowler of Two Ways Home (who features on the single) to join them on stage – mostly, simply because they could!
Callum and Jack kindly sent a copy of the new single so I could have another listen… 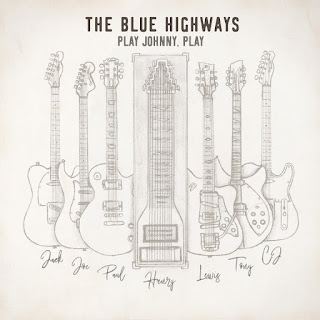 Opening with a guitar shred that sets the tone for what is to come, Play Johnny Play is very much in the old guitar driven rock n roll style, it’s an uptempo song that is easy to follow, easy to sing – or indeed shout – along to and the guitars on the track sound incredible.  Callums powerful vocals seem to almost be a match for the guitars.

The Blue Highways assembled a plethora of some of the finest UK Americana guitarists to play on this track.  A song about a guitarist, about how music draws you in, it is the first single I’ve been sent that has to have a separate list of the guitarists who played on it, and each of them adds their own style, their own twist to the playing.  Listen to this song in two halves – the raw vocal from Callum, and the incredible band of guitars – and neither half will disappoint!

“With Jack (the band’s lead guitarist) and our six guest stars, we had our own Magnificent Seven - each bringing something different but also working together to create a single great track,” says Callum

Watch out for The Blue Highways on stage, at festivals – and maybe even in church if Callum is on organ duty!

The Blue Highways new single “Play Johnny Play” is now available on the usual platforms, and the band can be found online, on Facebook and on Spotify

Posted by Silverball Leisure at 5:57 AM