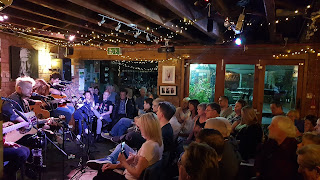 Whilst chatting at the end of tonight’s Nashville Sounds in The Round, one of the artistes – Kevin – asked me if I enjoy shows in this format

I had no hesitation in telling him that yes, I really do!  The format itself is great, but more than that, in a setting like this one we get an almost unique opportunity to see artistes who are new to us, artistes who perhaps we normally only see with a full band, or at a festival.  We see them close up, we get to know them through their songs and their music, and also through the stories that they tell us – whether about the song they are about to perform, or their personal musical journey – or just really cool stories from life! There is also the chance to meet after the show in an informal setting, browse the merchandise and just have a chat

The real beauty of the songwriter’s round format is that it is totally stripped back. No matter how big you are, if you've played Nashville, headlined a festival, co-written with stars or normally tour with a big band, this is honest. Just a singer and guitar, it is the truth of three chords and the truth

Kevin told me that he too loves the format – because in the same way as the audience, he gets to know other artistes, something that you can’t always do when you eat sleep and breathe music – you are just too busy to listen to others and meet others.  Performers can really listen to their peers, bounce off them in their song choices and play alongside people they haven’t met before, or maybe have always admired… 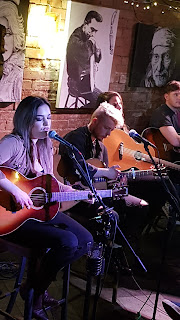 The line up for this, the seventh Nashville Sounds In The Round, was certainly no different in this respect.  Although missing regular co-host Steve, the evening was perfectly handled by the other half of award-winning duo Gasoline and Matches Sally Rea Morris, although she did tell us she was missing her partner when it came to choosing what songs to perform. Sally was joined by three invited acts. 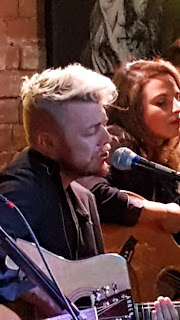 Sitting on Sally’s left was Glasgow’s Kevin McGuire.  He and Sally only met for the first time just before the show although he had visited Birmingham before.  Although Kevin talks with a distinctive (and genuine) Glasgow accent, when he sings you can barely detect his roots as the burr blends into his country sounding voice. At times - with his song “Killing Time” his soft guitar playing really serves to accentuate his voice.  Sitting next to the absolute Queen of stories, Kevin lamented his lack of tales, and revealed that all his songs are just written in his bedroom! 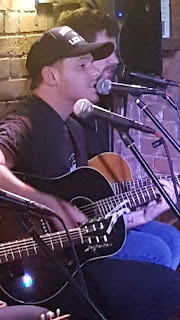 Also sounding rather different when they sing were Jack and Rob from Holloway Road.  The transformation is quite staggering – between songs both lads are full of cheeky Essex banter but when they start to sing it is more Route66 than A127 (we checked, that’s the road to Southend!).  Many of their songs open very softly, as fits an acoustic round, with the two voices and two guitars combining perfectly.  Having only seen these two before with their full band at Nashville Meets London it was great to have the chance to see them perform some of their less well-known songs alongside some of their bigger hits 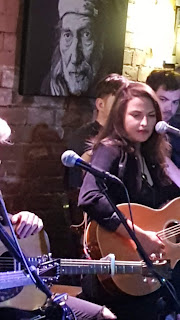 Sitting in the middle was Danni Nicholls.  Hailing originally from Bedford you can tell from her singing and song writing style that she is no stranger to the US.  This was my first opportunity to meet and hear Danni, I was mesmerised not only by her voice, but also her guitar playing.  For her first song – after telling us about her journey to being a full time musician – Danni performed “Long Road Home” (unusually she plays standing up) and her guitar sounds almost like a full backing band with the way she plays, providing rhythm, backing and the beat.  In other songs – “Beautifully Broken” - Danni plays in an almost classical Spanish style backing up her powerful, plaintive voice, a voice that really draws you in. When singing “Back To Memphis” that same voice transports you to a dive bar, at the end of the night, when you just can’t leave until the singer finishes….

Songwriter rounds then are a great way of meeting and finding out about artistes.  Tonight we learned that Sally has a story for every song, that Kevin envies both the stories and the country sounding name that he lacks.  Holloway Road have collaborated with the Brummies as well as the writer of “Bob The Builder” and Danni Nicholls released an album that became known as her “break up” album.  We learned not to cheat on a songwriter (Sally), that Essex girlfriends are called “Julie” (Holloway Road), that Kevin only sings one of his first songs, and that Dani has written a love song to herself, because, as she says, “the greatest love is you”

Songs, stories, stripped back sounds.
Songwriters rounds are special, and Nashville Sounds in the Round continues to be extra special.

The next Nashville Sounds in the Round will be at the Kitchen Garden Café on 28 August.  The line up is superb (again) and tickets will sell fast 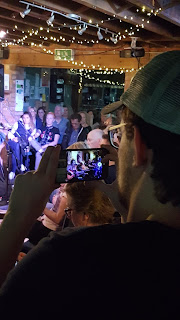 Posted by Silverball Leisure at 6:10 PM