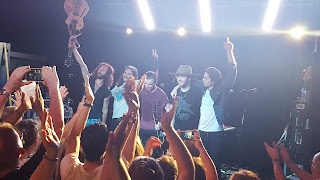 Coming from the state of Washington Bailey is at home in a beanie hat and oversized camo shirt, however when she sings its definitely country, three chords and the truth. 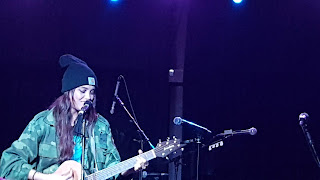 Bailey has a unique sound, influenced by rap and R&B, which really suited her cover of Drake’s Too Good – convincing a sceptical country audience that it “wasn’t too bad” and at least one audience member declared Bailey sang it better. This to and fro with the crowd continued throughout the set – Bailey has a charming, honest and humble personality – although she can hide behind her on stage alter ego – just like Beyonce – and she assures us that it is not her that is crazy, it’s her other self.

Bailey’s songs reflect her faith, and her upbringing particularly evident in Songbird which she describes as bringing her out of a dark period with writer’s block.  Still containing those hints of R&B the song is very much a country song, but in her own style.

Bailey was surprised and thrilled that on only her second time playing in the UK some of the crowd knew her material and sang along. Bailey – as with many US artistes – was grateful for the reaction to her music which allows her to be able to do what she loves to do 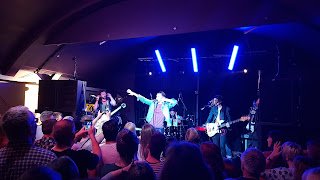 LANCO burst onto the stage opening their set with Hallelujah Nights, and the energy levels didn’t drop for the whole show! Hailing from the southern states of the US, this band of college friends clearly love to perform, and the crowd loved to hear them. Despite this being only their second visit to the UK, and having only released one album, the crowd were clearly familiar with every song they sang and were ready to rock along with them, although nobody could match lead guitarist Eric Steedly for energy, enthusiasm and frankly great hair.

Working their way through the album, the inclusion of new song Rival heralded a change in the music, as stories of how the band formed and their favourite types of music outside of the Country genre was followed by a very enthusiastically greeted Mr Brightside – a track which really suited LANCO’s style.
After this, the evening took quite an unusual turn with lead singer Brandon Lancaster reminiscing about attending concerts, playing small shows and gigging in Nashville Honky Tonks before leading the band off the stage, over the barrier and into the middle of the tightly packed Institute3 to play a covers set. It isn’t something many bands do – and it was certainly well received, especially by those in touching distance! 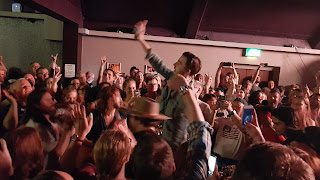 Three more tracks to finish off the album and an encore of Greatest Love Story rounded out a great night in the smaller of the Institute’s rooms, but one that was tightly packed with fans and new fans.

Posted by Silverball Leisure at 12:59 PM