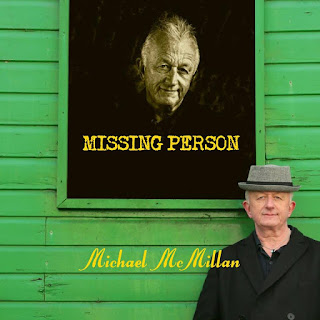 I met Michael too briefly at the BCMA awards show, but I have a strong feeling that I’d like him – and that’s a feeling I get just from listening to his new album Missing Person.  Working through the tracks you realise very quickly that Michael doesn’t use any gimmicks, there’s nothing “clever”, just genuine, honest traditional song-writing and storytelling from a Man who has clearly seen a lot through his life.  The album is full of memories and lessons, all delivered in a gentle and friendly way, like advice from a generous man.

The opening track, Coming Home, really sets the tone from what is to come. Starting with a soft acoustic and Michaels soft voice we hear the story of a man coming home, home to a better time and a better place.  There is a genuine warmth to the song, the delivery, and the words of the storyteller – no bitterness from the war.  There is a change of pace and style to describe the war, but it is brief and almost unimportant – family and coming home are what matter.  The pace picks up at the end – you can see our soldier quicken his step as he sees his street, sees his front gate…  Will this be the second single from the album?  I’d hope so.

Many of the same adjectives can be used for the rest of the album. There is a definite nostalgia in the song writing, and you can be sure that the words are coming from the heart.  The Only Word is a song looking back at life and love; So Many Thorns is very self-reflective, touching on Michael’s personal faith. Tell Me, a song about love and relationships, A Better Place a song about loss and We Don’t Listen, a song about learning from mistakes can all only be written by a songwriter who has seen maybe too much of what the world has to offer. 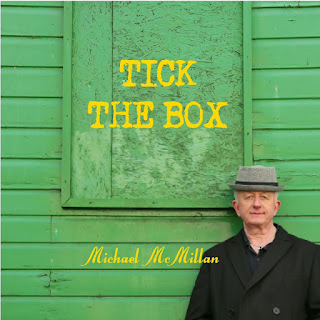 There is a change in pace when we reach Tick The Box – and it is clear that this was always going to be the first single off the album.  A step up in tempo it is a very well written observation on modern society and the upsurge in TV talent shows and instant gratification.  Michael still manages to put this across in a warm way – giving his opinion without preaching (too much!)

A great album, that when you listen to it you feel that Michael is talking directly to you – and I feel it would even be the same hearing it live.

This is an album that you should listen to by a fireside with your dog as your companion – or better yet, with Michael, telling you his tales…

Michael McMillan's new album Missing Person is available from 10 May on all usual platforms.

Michael can be found on Facebook, on his website, and at the table beside the fireplace, with a pint, a dog and a story...

Posted by Silverball Leisure at 8:31 AM