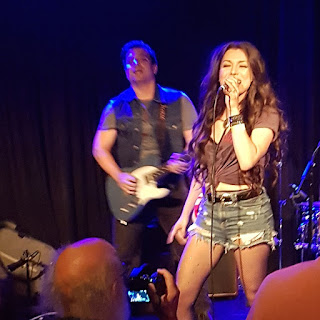 When I met up with Jessica Lynn ahead of the Birmingham date on her UK tour, the word that cropped up most in the chat was “family”  if you haven’t seen Jessica perform, you may not realise that basically her whole band is family – Husband on lead guitar, Dad on bass, Mom on backing vocals, “Uncle” Bob on pedal Steel and her percussionist was even a “bridesman” at her wedding

I had to ask then, how does the family dynamic work with the band

People feel the genuine love and connection we have for each other. People come to the shows and they feel like family because you’re with family

Having had some issues with previous bands, Jessica wanted to be a solo artist, in her own words 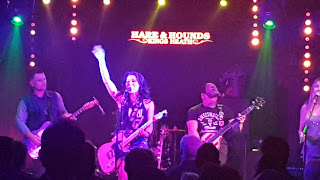 As a family band, I had to ask how you resolve musical conflicts, especially as your dad is literally stood right behind you?

said Jessica with a laugh

My family is great and respecting that it is my vision and my project and they are always there to offer support and ideas and everybody comes to the table with ideas.  It’s the pieces of everybody that makes the sound what it is

Is it harder to bounce ideas when the band is so close?

Its easier. Because you can be super honest.  With other people you don’t want to hurt feelings but we can just look at each other and say “that sucks” so it makes it a lot more honest and easy

Coming from a musical family – Dad Pete and Mum Victoria met through music – it was pretty inevitable that Jessica would take to music.  The story starts with her first band at the age of 13 with her parents driving her all over New York City playing Rock ‘n’ Roll in clubs that she was too young to actually go to, but always listening to country music. At age 18 Jessica formed a Wedding band which was the start of music being her living post high school. Incorporating family into that band then transitioned to become Jessica Lynn

The band tour Europe every year – so what keeps bringing Jessica and the family back?

Its really the people. The people here just love live music so much. There is a certain vibrance for live entertainment and music in Europe.  In the states a lot of concerts are a party, its about the atmosphere, the dancing and the drinking; here in Europe the crowd are just watching, they are there for the music not for  the beer and the dancing, it’s a very cool experience as a songwriter to have the undivided attention for something you have worked so hard to create

However, when comparing the audiences, Jessica doesn’t have a preference, she enjoys the different experiences, which adds to the excitement of a tour

Jessica Lynn plays concerts at US Military bases overseas, bringing a little bit of home to them which is clearly a source of great pride.  What does Jessica want to bring to the non-American audiences?

I’m bringing a piece of home, but also a piece of myself.  When you listen to my music its like reading my diary, and its kind of scary to read your diary out loud to thousands of people, but that’s what’s cool about live music. And that’s what I try to bring in my live shows is a genuineness about my life and my music – what you see is what you get with us 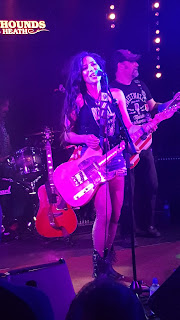 I was curious to know who has influenced Jessica the most.  Jessica had to give two answers – Gwen Stefani from her rocker days in terms of energy and performance, but for song writing, music and delivery her biggest single influence is Neil Diamond. Not quite the answer I was expecting!

Surrounded by family, influenced by the greats and an act honed in the clubs of New York Jessica Lynn is a delight to meet and chat with, and a sheer joy to watch performing.

Catch the rest of her UK tour if you can, and catch her online, on YouTube and for certain on a future UK tour 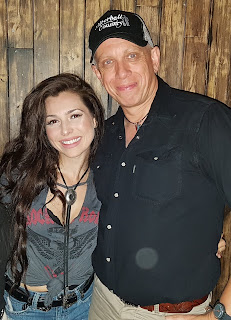 Posted by Silverball at 7:59 AM