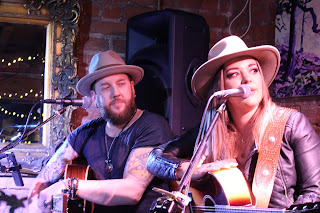 The very popular Nashville Sounds In The Round is hosted by the BCMA award winning Gasoline & Matches who perform in seat 1 as the very familiar duo of Sally Rea Morris and Steven Marks.

Sally makes a great host for this event, interacting with all the visiting artistes and really keeping the evening moving with her teasing banter. 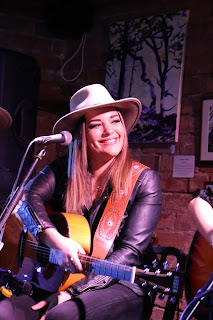 First song of the night was about an ex-boyfriend of Sally’s – and she denied my suggestion that ALL her songs are about exes with a smile!  “Not Into Country” is by now a familiar song and you felt that Sally and Steven were having fun performing it, adding harmonies and guitar parts 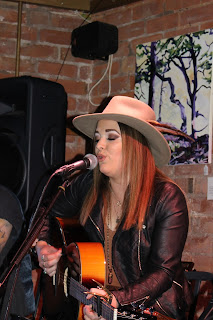 Talk of Steven's busy and jet set life (He was leaving for China the next day) leads into an almost ironic "If You Wanna Stay" incorporating a wonderful guitar solo, almost a lesson in playing from Steve 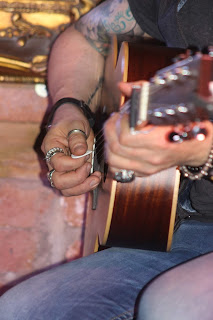 These evenings are an ideal opportunity to try out new music and see the audience reaction, as well as giving the audience an insight into the song writing process.  A quote about men being “Patient Wolves” gave Steven the title for a new song, and for this one the pair flipped the usual lead and harmonies, and as ever their voices blended effortlessly as do their guitars. 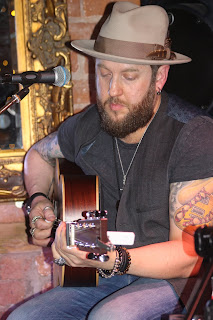 Throughout the evening, while Sally provides the banter, Steven plays along with the guest artistes, providing solos, counterpoints and accompaniment which really demonstrates his skills with a guitar

Reminiscing about an early trip to America and being introduced to Tequila for the first time by a supportive friend who is no longer with us was the obvious introduction to Gasoline & Matches’ most recent single release “Tequila’s a Healer”. A beautiful, emotive song about loss, we reviewed it on release here

Following more talk about drinking, it was clearly time for the ever-popular drinking game song “Never Have I Ever”. I’ve seen people look scared at this song and have to measure what is left in their glass before it starts!  It has spawned a flyer and a t-shirt, so we can only hope that it will be featured on the upcoming album

Following the flip of the order after the interval it fell to Gasoline and Matches to do the Thank-Yous, announce the next line up and then sing the final song of the night.  Possibly based on real experiences, and almost certain to be on the album, the evening finished with a spirited rendition of “Smiling Viper” 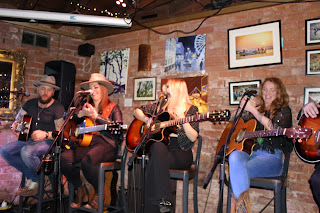 Gasoline & Matches have created a fabulous night for Birmingham music fans, and manage to mix hosting with a great performance every time, Catch them here every few months, on the festival circuit and at
www.gasolineandmatchesmusic.com

Posted by Silverball Leisure at 9:57 AM