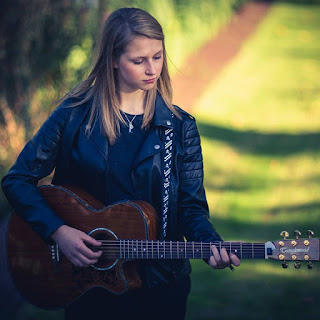 With a look and sound of Taylor Swift, her chat between songs is pure Midlands and very confident. I don’t want to harp on about her tender years, but the banter and the demeanour really belong to someone older.  Having said that, Emily has been playing since she was 5 years old, with a guitar bigger than she was, and started singing because she thought that just a guitar was boring! Song-writing started at age 12 , first studio recording at 14 so a lot of experience has been packed in already with proper performing starting only a year ago and a very determined attitude from both her and her Dad has seen her performing at better venues in her first year of performing, avoiding the noisy pubs that form the early part of many a career.

A love of Taylor Swift, and with a desire to emulate the style of Catherine McGrath has brought Emily to Country via Country pop and a disdain for modern “three minute fifteen songs that are repeating the same chords” has had a definite effect on Emily’s writing.  In her own words “I think that a lot of people who play country and country pop have something to say”.  A mandolin has been added to “see how it sounds”.  It is featured on her new album, and I can assure her that it sounds great! 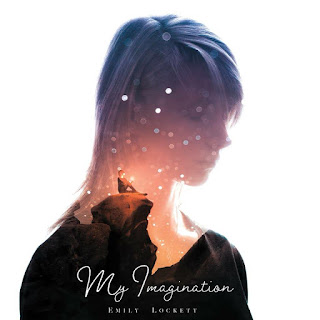 Listening to the tracks on “My Imagination” you can definitely hear Emily’s influences. But this is no tribute album, this is a real body of work on which Emily plays most of the instruments as well as singing her self-penned songs.  Some of the tracks are reworkings of her first release, but with her new maturity woven into them, the newer songs would stand against any other debut album

“Strangers Again” and “Nice eyes” concentrate on Emily’s soaring voice, while “Where We Left Off” employs a powerful bass line and great guitar picking to underscore the apologetic, wistful lyrics.  In all the tracks there is a maturity that took Taylor Swift more than one album to achieve.  This album has certainly earned a place on my car stereo, and this year should hopefully see a single or two, plus music videos, as “People like to have something to look at”

You have to admire Emily’s work ethic, and just to cement her Stoke on Trent credentials she not only won Local Musician of the Year from 6 Towns Radio but it was presented by Robbie Williams’ Dad!  To test her further I did ask if she can throw a pot – she can’t - and if she can name the 6 Towns - another no! 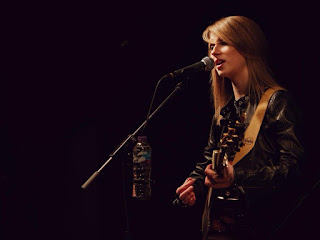 At 17 years old (there’s that age reference again!) Emily is not quite the finished article, but I am excited for her future in music and she is someone who needs to come to the attention of Festival Organisers to book her before she starts headlining, as she is already supporting, and being approached to support, many touring artistes!

You can – and should – follow Emily on all the usual platforms and on her own website at www.emilylockett.co.uk

Rik Wrote This
All photos (c) Emily Lockett Music
Posted by Silverball at 9:47 AM