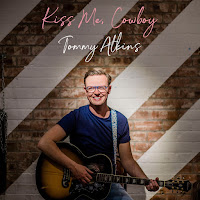 Tommy Atkins is back with his first EP following up the success of his two single releases Cinderella’s Had A Drink and his country Cover of Freedom.  Both of these are included on the EP along with new tracks Wild in the Wind and the title track Kiss Me Cowboy

Kiss Me Cowboy is not just another cowboy love song –this time it’s about LGBT acceptance, but also just about acceptance generally.  Opening with acoustic guitar and violin, with drums giving us the rhythm, the strings really add to the mood of the song, providing almost a second vocal.

The song contains strong emotion without being overly emotional, contains a message without preaching.

As before, despite being from the North East UK, Tommy has written about classic Country themes – the setting of a country fair, reference to a truck - the imagery is all there and it is easy to picture the scenes as they play out through the song almost as though watching it on a screen.  It’s a story of a relationship that meets with disapproval, two people fighting against parents and – in this case – against prejudice.  Finding those moments, away from everyone where you feel safe to ask “Kiss me, cowboy”. Tommy voice is quieter than normal, a hush effect that helps explain the situation.

Although the ending isn’t quite fairy tale, the story isn’t quite finished and there is certainly hope in there – hope that their love will survive distance and hope for acceptance.

Tommy has won awards and nominations not just for his music but for being a positive role model in the LGBT community, and surely, he will continue to be recognised in both fields.  Tommy’s first single – Cinderella’s Had a Drink – was nominated for our own Silverball Country Awards and lost out only due to very tough competition

The second new track - Wild In The Wind – is a very listenable relaxing track, showcasing Tommy’s voice against a varied instrumental, with drums, guitar, strings, pedal steel, and dobro.  In a way it’s another love song, but a tribute to a lost friend, quite wistful with the emotion again supported by the violin and very subtle backing vocals from Anna Pearson.

It’s a song about wanting to go back and experience all those firsts again with your friend, looking on the brighter side of life. The friend in every memory, forever 17 in the shot gun seat and wild in the wind. The friend you miss and would give anything to see again.

It’s a perfect ending to this 4 track EP 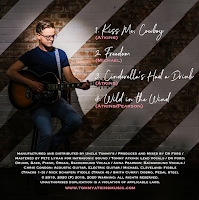 Kiss Me Cowboy, the new EP from Tommy Atkins is available to download and stream now on all major platforms
Find and follow Tommy on Facebook, his website and on Spotify
Posted by Silverball at 4:20 PM