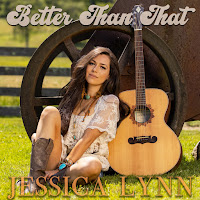 Unusually for a song from Jessica Lynn the pace and feel of her new song Better Than That are set by the pedal steel (rather than the usual guitar driven tune), which provides the opening to this almost ballad.

I say almost as it isn’t quite a slow song and isn’t quite a love song. Its about a very familiar love triangle – him, her - “the one”, and the third party - our storyteller who knows you Better Than That and is more likely to actually be “the one”.  She’s the one you come to, the one you talk to, the one who knows you and certainly the one who thinks that you’d be better off with her!

She knows this man "Better than that", hoping he will see what is in front in of him, the person who has always been there.

Is there a touch of the green eyed monster, is she hoping he will see, so she can be that one.  The other girl brings him down, but we don't know anything else about that relationship.

If you’re hanging in there for the one, this song will relate and hopefully spur you on.

The feminist within me says, don't open that door at 2am, stop being the fool, maybe, just maybe, that will make him think twice.

The whole band is present on the backing, and the country roots are certainly evident.  It is a great mix of the stripped back songs that Jessica has released recently and that haunting steel sound.

The pace of the song reflects the feelings involved, and shows that Jessica can not only swap between genres but also between heartfelt storytelling and her well known stage rocking style!

It is a catchy little tune that will have you singing along, perhaps even a sway or a little dancing too, especially the opening.

A great piece of song writing, Better Than That is a co-write with Clay Mills who has a distinguished pedigree, having written for artists including Darius Rucker, Trisha Yearwood, and Little Big Town.

Jessica and the Band will be in the UK for their long awaited return, starting in London on 9 May, moving on to Southampton, Birmingham, Derby, Swansea and more through the month.  Full details on the website - tour dates

If you've enjoyed this review, please give us a follow on our Facebook page and on our Insta

Posted by Silverball at 2:20 PM