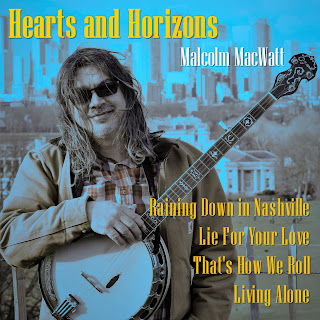 The EP opens with the incredibly clever and emotive Raining Down In Nashville. Written in the traditional story telling style, the song uses incredible imagery and dual meanings. A phone call, bad news, crying until “my shirt was wet” and a cop who tells the storyteller that “you gotta move on” – a message taken up and emphasised in the harmonised chorus, reminding us that you have to move on from grief and loss; the tears mimicked by the “rain in Nashville”. Its set to the full musical array of a guitar, banjo and drums keeping the beat; whilst its sad you will want to tap along. In true country spirit look for the silver lining. Malcolm tells us that this song was influenced by the death of a country singer in 2019, but the song could be about any kind of loss – it is quite late on that we even get a clue what the news was in that phone call, allowing us to interpret the loss in any way that we choose.

Lie For Your Love opens with a long string intro with drums announcing the vocal. It is a soft voice, gently explaining that this relationship is wrong, telling her that the storyteller is not what she thinks he is, not what he is painting himself to be.  Joined by Clare Portman, they beautifully admit to one another that they wold do anything for the other’s love, steal cheat and lie; leaving the question is it love or obsession?

The two artists complement each other perfectly, there’s that steady drum beat in the background, a definitely Malcolm sound.


That’s How We Roll is a lovely song as a standalone, and sets up the final track quite well. It’s a relationship that we hopefully all recognise, and if we don’t have it we aspire to it.  Two people who simply deal with whatever comes up, together.  Not quite as catchy as the preceding songs with more banjo in this one.

I'm ready to roll to the next song!


Although Malcolm’s music has a traditional feel, this is song is on an absolutely contemporary theme.  Talking about the internet and its role in seeking love.  This really resonates, perhaps with those of a certain age, lives straddling the old days and the new.  Most people don’t want to be lonely and are looking for that special someone.

A quite cynical quote, which I hope isn’t true: “the internet has replaced the bar at the weekend”

Heed the warning, don’t leave it too long, we all get too used to living alone

With this new EP Malcolm has very much travelled the Americana road, using banjo, pedal steel and dobro to accompany the songs, plus the drums punctuating the emotions and the guitar leading all of the instrumentation.  The addition of Clare Portman’s vocals act as a perfect counterpoint to Malcolm’s own voice

Hearts and Horizons, the latest EP from Malcolm MacWatt is available to download and stream on all major digital platforms

Posted by Silverball at 9:54 AM