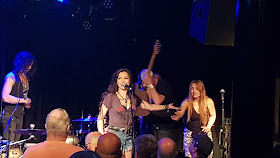 Jessica Lynn and her band have reached the UK (again) on her their European tour – a tour that started sometime in May!  First date on the UK leg was at the Lexington in Islington, which really felt like a proper old fashioned intimate live venue.

Opening act for the Lexington was a brand new band – The Fatherline, with a very familiar looking bearded face fronting it. Tim PJ, who was one quarter of the Wandering Hearts until recently, took to the stage for his first gig with this new band: Steven Marks on Bass and Rich Watson on lead guitar.  Although obviously not new to performing, Tim took his position, centre stage like a natural demonstrating  stage presence and with good humoured banter. His own music is raw and heartfelt, and went down really well with the assembled crowd. 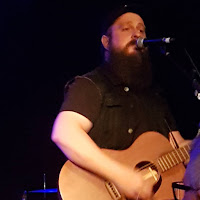 Next up were Gasoline & Matches who will be opening for Jessica on a number of dates on this tour.  Performing as a four piece, Sally Rea Morris and Steven Marks were joined by regular bassist Jamie Clayton and stepping in on drums was Pano Moullaris.  Although they have an album out very soon, Gasoline & Matches are very much a live band, as evidenced by their barnstorming Paddock Stage set at the recent Buckle & Boots festival, and tonight was no difference.  Their individual musical skills – especially Steve’s guitar work and Sally’s ability to own a stage – means that every show is slightly different, and with Pano pounding the skins, they really brought out their rocking side which was in tune with the venue.

Jessica Lynn doesn’t walk onto a stage, she bounces on, and she bounces for the whole performance.  The whole band really know how to put on a SHOW, and the energy they bring and the fun they are having is evident from start to finish.  In fact, it isn’t so much a show as a party on stage – and we are all invited to join in!  Dance if you wanna dance, sing if you wanna sing, but be sure you put your arms in the air! 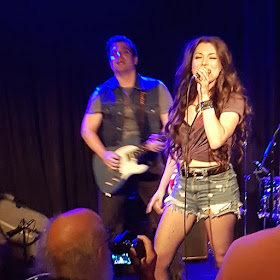 Jessica treated us to a mix of her older songs, new music, tracks from her new album and some well placed rock covers.  It is difficult to pick out highlights from such a show, but… Queen’s Fat Bottomed Girls and a cover of 9 to 5 played as though they owned those songs, the unmissable Roadhouse which had every person in the room joining in and an impromptu dance group at the back of the room consisting of Silverball Country, Sally Rea and Lauren, dragged away from the merch stand! It’s not a Jessica Lynn gig now without an amazing rendition of Johnny B Goode, which  showcased the talent of this band with Uncle Bob stepping up front on guitar and  Jessica moving back to drums. 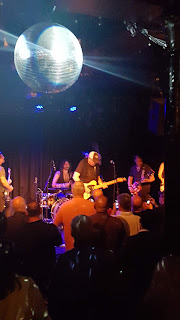 This is a tour you really should catch – Birmingham tonight and all dates and tickets on www.jessicalynnmusic.org 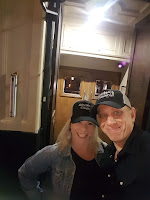