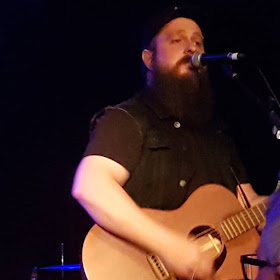 Standing in the Lexington on Tuesday evening and seeing the first ever performance from The Fatherline I knew that I just had to have a chat with the confident guy stood on stage with excellent banter who seemed oddly familiar...

Following on from a comment on stage about age, that’s where our conversation started. A little bit of flattery never hurts and puts everyone in a good mood, not that it was required after such a good set.

This wasn’t Tim’s first ever gig like he suggested, but it was the first where he was stood centre stage, so of course I wanted to know how it felt and compared. In short Tim replied,

Everything is on you!

He went on to explain:

I’ve been doing this over 20 years, being in bands and tonight was probably the scariest thing I’ve ever done; a pub in London compared to Hyde Park or the Opry. There's something very personal when it's just you that just writes the music it's very very personal.

Tim played down his background and where he had performed, focusing instead on The Fatherline, I couldn’t help but wonder why he didn’t launch his new band on his former glory and play the big I am. Tim explained that it wasn’t something he would ever want to see in another artist and:

at the end of the day I am who I am; this is how I dress; I've always wanted it this way I wouldn't dress differently in a different band or to look more country.

Tim had said on stage that he didn’t know what The Fatherline was (in musical terms) and that he didn’t care, with a lot of current debate about what is and what isn’t country music, I thought it was worth pursuing. Tim doesn’t describe The Fatherline as a country band, in fact he says its barely Americana,

Tim went on to say that

if I’m going to write a  country song and if we can mould it into what the The Fatherline is, then fantastic, if it works it works, if it doesn't I'll give it to another artist,  I do a lot of writing for  other people and production for other bands and artists, I love that to me I can get all that creative stuff out whether it's for me or whether it's for someone else it all comes out so that's all that matters.

In my view The Fatherline’s music had an honesty about it and represented the truth. We agreed that UK country is singing about the truth, what you know. However, Tim added an air of concern, that there was a pressure in the back of your mind you must consider your audience and how to reach those that are going the buy the albums or attend the gigs.

The Fatherline is a group and Tim hopes that as a unit they will create music together and the sound will change naturally. No pressure on Steve or Rich then!

Performing is a drug, these were the lyrics of one of the songs. Talking to Tim, it appears it certainly is as he explains that to be able to write is a freedom. On stage he doesn’t think about what he is doing or how he moves, what happens, happens.  Tim talks about getting lost in his music and hopes that the listeners do too, they will take The Fatherline forward.

Help Tim feed his habit, get addicted and listen to or see The Fatherline as soon as you can. 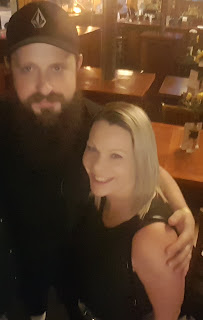